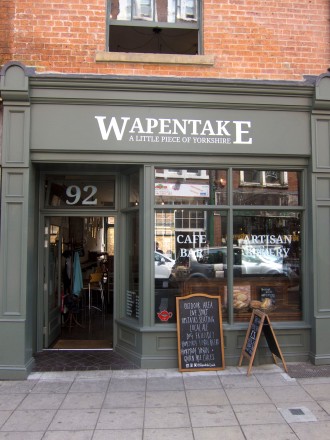 A long, long time ago in Sheffield, I remember a pub called The Wapentake, aka The Wop, that used to be full of Heavy Metal types drinking out of plastic glasses and listening to what they, presumably, thought was music. If you were into that sort of thing, then it was a right of passage for anyone remotely appearing 18 to visit. Indeed many a long haired sixth former at my school bragged that they had been drinking in The Wop on a Saturday afternoon, when in reality they had only walked past it and peeked in whilst out shopping with their Mam.

I was interestingly surprised when a similar named establishment opened up on Kirkgate in Leeds so I went along with a group of friends. Their initial reaction was what? Where? Four rounds later, this turned into, do we have to go?

Now I read recently on another blog site that Stonch reckons there is nothing trendy in Yorkshire. Well, I will dispute that strongly, but who gives a Fat Rascal about whatever he thinks! Anyway, whether you think it’s trendy or not, I bet that you will agree with me that it is very good.

Having said all that, Kirkgate isn’t exactly the trendiest part of Leeds is it, or it wasn’t. I just wish that I had the foresight to buy a property down there about three or four years ago. You could pick a four storey shop up for less than £100K and then get a sizeable grant to do it up. And that’s what the cognoscenti have done, and now there are some really cool places down Leeds’ oldest street. Wapentake definitely being one of them.

It’s difficult to put a finger on what Wapentake exactly is; a bar, a bakery, a café? Probably all of these and more. I’ll just say that it is a really friendly place that serves good beer, both cask real ale and more modern keg beer styles. It’s been open about six months now and I’ve called in a few times and it’s never quiet and it’s never over busy, it’s just like spot on. You won’t end up stood on your own like Nelly-no-mates neither because everyone talks to you, even The Oddfellows from next door who are an amazing inky bunch.

It’s a bit like, but not, a French café and it’s even got elements of a decent NY Irish bar, so I asked Anton Welburn, who along with Emily Youell owns and runs the business, what their ethos was? Simple. Yorkshire! If I’m honest, I shouldn’t have had to ask because you’ve only got to look around and see that everything shouts louder than the Western terrace at Headingley – YORKSHIRE, YORKSHIRE, YORKSHIRE, YORKSHIRE!

As well as the bottles and cask beers there are three keg lines, plus a range of lagers and cider to suit everyone. I won’t go into detail and I’ll just stick the tap list up instead so you can see what I think are pretty good prices for the city centre. In terms of beer quality, everything I have had has been spot on. They even tell you about any unfined ales before they serve you anything murky. Last time I was in I had a North Bar brewing Tropical, which very probably will be the only time you’ll ever see it in cask, as a special request made by Anton, just before they kegged the rest, and probably every other successive brew (note the pump clip in the pic above).

They do food as well. Full Yorkshire breakfast for £5.50. Snacks, light meals, sarnies, Yes, all locally sourced, and cooked in house along with their own bread and cakes which make it the only pub I can think of in town that is actually a bread and cake shop too? Apparently people do come in just for the bread which at £1.50 for a brown or white artisanal type loaf is good value.

As well as the single room bar there is also a second room upstairs and a nice yard cum smoking area at the back. Dogs are welcome and seem almost obligatory. Well behaved kids are allowed until early evening and there is plenty of stuff for them on the menu. In fact there is something for everyone at Wapentake and it’s the sort of place where you will see Fashionistas mixing with Gran with her coffee, Grandad with a pint, Grandkids with pop, burgers and free Wifi, comfortably sat enjoying themselves amongst Ladies who lunch, while serious punters prop up the bar, interrupted only by a foodie calling in for their daily bread. There’s even a Joanna, customers for the use of, so long as you can play it and can do requests.

I chatted to a bloke at the bar who said his wife wouldn’t go in a pub unless the toilets were spot on. Well Wapentake’s two uni-sex toilets (with baby changing) are exemplary. Unlike some other nearby establishments, renowned for their beer, where Mrs C and the ladies in our circle will always go for ‘a quick wee’ anywhere else before they enter the premises. Which sort of brings us full circle, to the original Wapentake I remember as a teenager in Sheffield, which would be instantly closed down nowadays, it was so disgusting.

Wapentake  (wŏp′ən-tāk) An old Northern English translation of the old Norse Vāpnatak or weapon-take, the act of taking and showing weapons to indicate assent, or vote by show of sword, spear or axe, at public assembly. Essentially a council which became a subdivision of the Viking influenced northern counties in England, corresponding roughly to the Hundred in the lesser shires.

This site uses Akismet to reduce spam. Learn how your comment data is processed.